How much the coronavirus will cost the world's economy?

The given question has been bothering all the economists.

The UN's trade and development agency says the slowdown in the global economy caused by the coronavirus outbreak is likely to cost at least $1 trillion or even more.

UNCTAD says the fall in oil prices (due to the price war) has been a contributing factor to the “growing sense of unease and panic”.

Apart from the tragic human consequences of the COVID-19 coronavirus epidemic, the economic uncertainty it has sparked will likely cost the global economy $1 trillion or more in 2020, the UN’s trade and development agency, UNCTAD, said on Monday.

“We envisage a slowdown in the global economy to under two per cent for this year, and that will probably cost in the order of $1 trillion, compared with what people were forecasting back in September,” said Richard Kozul-Wright, Director, Division on Globalization and Development Strategies at UNCTAD.

Launching the UNCTAD report as world financial markets tumbled over concerns about supply-chain interruptions from China, and oil price uncertainty among major producers, Mr. Kozul-Wright warned that few countries were likely to be left unscathed by the outbreak’s financial ramifications. 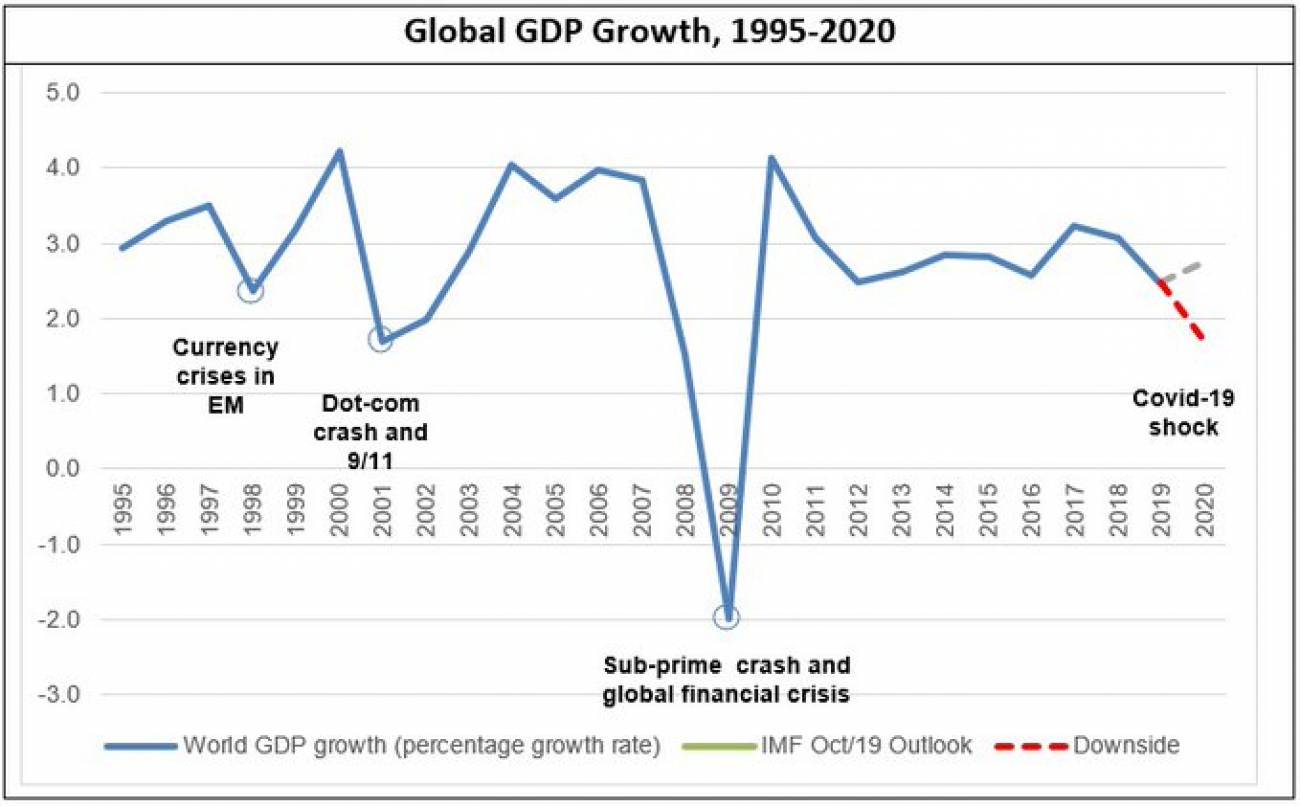 One “Doomsday scenario” in which the world economy grew at only 0.5 per cent, would involve “a $2 trillion hit” to gross domestic product, he said, adding that collapsing oil prices had been “a contributing factor to that growing sense of unease and panic”.

While it was difficult to predict how the international financial markets will react to COVID-19’s impacts “what they do suggest is a world that is extremely anxious”, he said.

“There’s a degree of anxiety now that’s well beyond the health scares which are very serious and concerning.”

To counter these fears, “Governments need to spend at this point in time to prevent the kind of meltdown that could be even more damaging than the one that is likely to take place over the course of the year”, Mr. Kozul-Wright insisted.

Asked about how different countries might react to the crisis including China – where the virus first emerged in December – and the United States, the senior UN economist said that the Chinese Government would likely introduce significant “expansionary measures” – shorthand for increasing spending or tax cuts.

“It will almost certainly do that,” he said. “Will the US Government in an election year, which is where we are…also need to respond in a way other than simply cutting taxes and reducing interest rates? I suspect it will do.”

Turning to Europe and the Eurozone, Mr. Kozul-Wright noted that its economy had already been performing “extremely badly towards the end of 2019”.

It was “almost certain to go into recession over the coming months; and the Germany economy is particularly fragile, but the Italian economy and other parts of the European periphery are also facing very serious stresses right now as a consequence of trends over (the last few) days.”

Describing many parts of the Latin American region as similarly vulnerable, he added that Argentina in particular “will be struggling as a consequence of the knock-on effects of this crisis”.

So-called Least Developed Countries, whose economies are driven by the sale of raw materials, will not be spared either.

“Ultimately,” Mr. Kozul-Wright added, “a series of dedicated policy responses and institutional reforms are needed to prevent a localized health scare in a food market in Central China from turning into a global economic meltdown”.

Although the threat of COVID-19 becoming an official pandemic “has become very real”, the world is “not at the mercy of the virus”, said the World Health Organization head, Tedros Adhanom Ghebreyesus, briefing the journalists in Geneva.

He said it was important not to let grim milestones such as passing the infection rate of 100,000 worldwide, sap resolve to contain the disease, stressing that 93 per cent of deaths so far have been in just four countries.

It would be “the first pandemic in history that could be controlled. The bottom line is, we are not at the mercy of the virus”, he added.